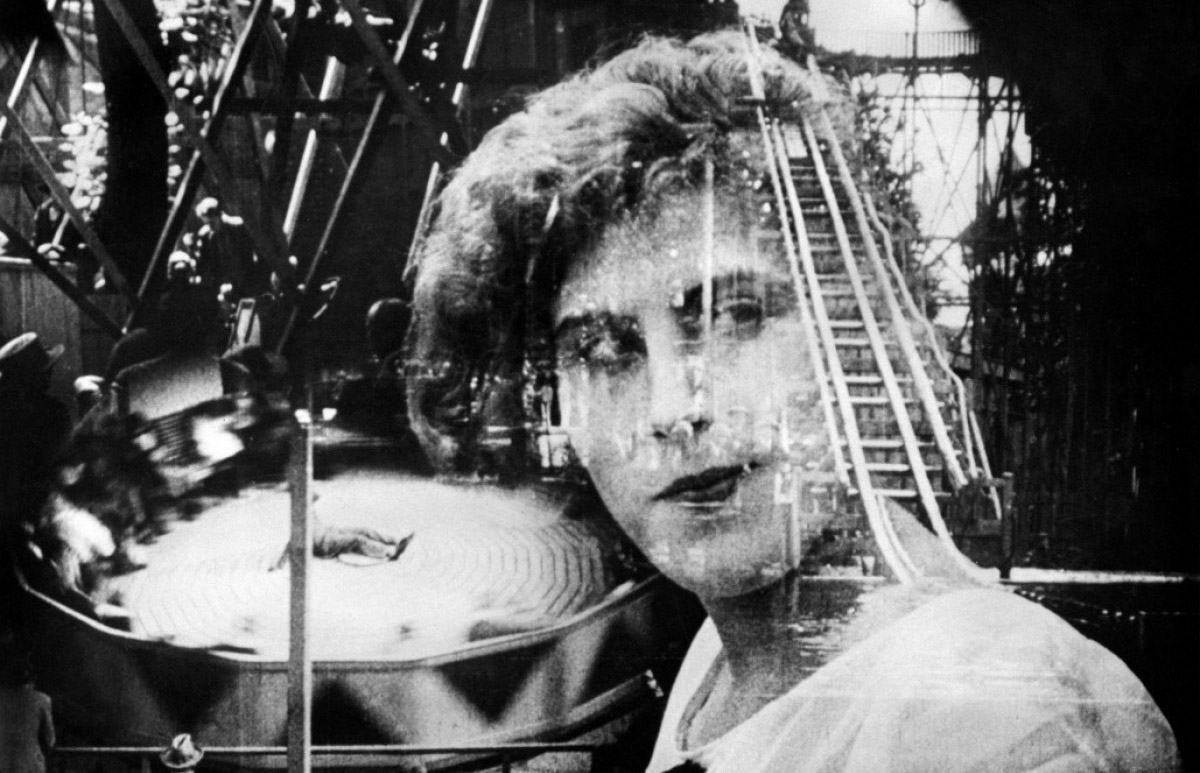 Jean Epstein’s Cœur Fidèle (Faithful Heart) established the great French filmmaker as one of the most inventive directors of silent cinema. A tale of a barmaid oppressed by an exploitative foster family who attempt to push her into the arms of an unscrupulous man. Yet Marie’s heart (exuberantly vivified by Gina Marès) belongs, as far as she’s concerned, to the tenderly Jean (Léon Mathot). Cœur Fidèle drives its simple story (which, with its infamous and exhilarating ‘carousel sequence’, helped pave the way for the narrative tradition of such Murnau masterworks as Sunrise and City Girl) on into the realm of what might be considered an early incarnation of French poetic realism — all while still anticipating Epstein’s magical, post-surrealist, later works.

Music by Ziv Taubenfeld (bass-clarinet), Marie Guilleray (voice and electronics), Ilya Ziblat (contrabass and electronics) and Onno Govaert (drums).
The hybrid jazz-electro soundtrack will be performed by a contrabass, drums, bass clarinet, and electronics. The music will not only take the plot into consideration, but also the characters' psychology, using it as a starting point for musical exploration and interaction. The choice of instrumentation offers a rich sonic palate: the rhythmical framework created by the rhythm section (drums and bass without harmonic instrument like piano or guitar, leaving the acoustic space open), the virtuosity and richness of the bass clarinet player, and the versatility of the computer musician. The cinematic narrative is based on a melodramatic approach, demanding great sensitivity to human feelings and values: Marie's struggle to escape her abusive boss/lover, the destructive forces of gender clash, a story of survival within the gritty, harsh existence of a low-class life. To that, the music adds an engaging accompaniment, a layer of sensitive sonic interpretation. Faithful Heart is an ideal match for a live soundtrack: the movie's rhythmical shots (reaching a glorious climax in the famous carousel scene) provides endless opportunities for instrumental virtuosity; the photomontage editing suggests a multilayered space, sonified by a mix of acoustic instruments and the electronics; and above all, the director's sensitivity to the characters' psychology demands sincere interaction within the ensemble, and between each of the musicians and their own instrument.

Ziv Taubenfeld is an improviser and a composer living in Amsterdam. Ziv started playing the clarinet at age 11, and later on, following the low sounds, the bass clarinet was added as a second instrument that soon became Ziv's main focus. Active in the European jazz and free improvisation scene, he had the chance to play in the Michael Moore Pool, and together with such musicians as Han Bennink and Ab Baars. With his own bands Bones and FULL SUN he has performed at the Bimhuis and the North Sea Jazz Festival, and in many major venues and festivals across Europe. Website: www.zivtaubenfeld.com

Marie Guilleray is a vocalist, composer and sound artist. She works in the context of contemporary, improvised, experimental and electro-acoustic music. She had the chance to perform with the Royal Improvisers Orchestra, MGBG, and many other imrovisers and electronic musicians. Marie is currently a Research Associates at the Institute of Sonology in The Hague and curates the new music series Ephémère at Studio Loos in The Hague. Website: marieguilleray.com